“WE’RE ALL DOOMED!  IS HOUSE OF FRASER THE TIPPING POINT FOR PRIDE IN OUR TOWN CENTRES? 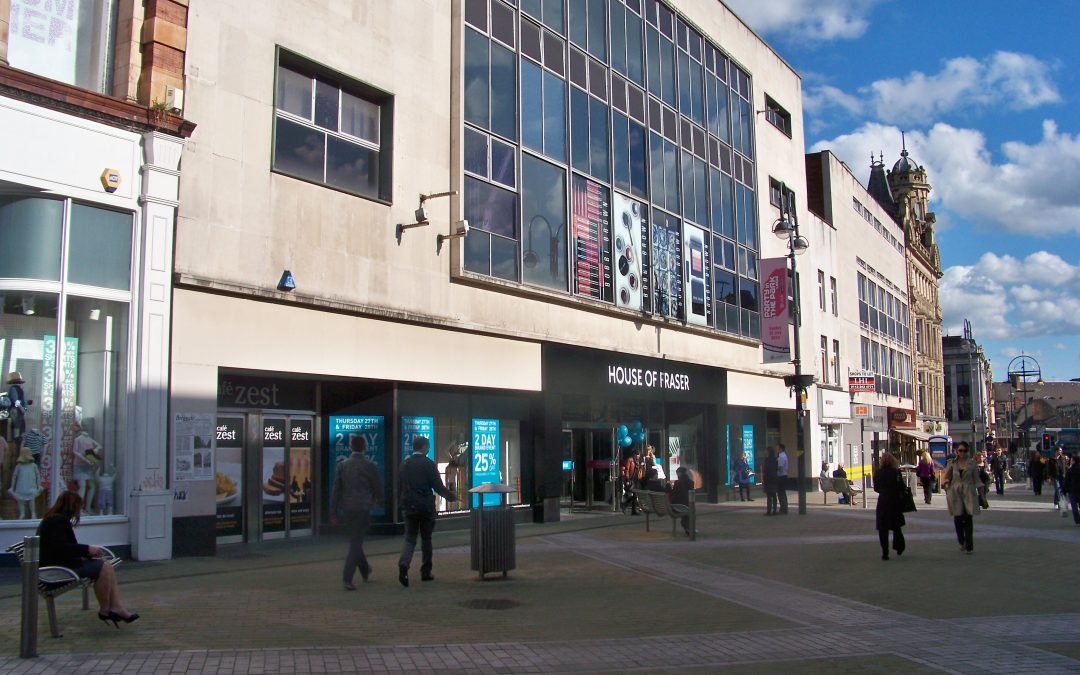 High streets and town centres have limped along in the past few years following the demise of Woolworths, Mothercare, BHS and Toys R Us, soon to be followed by wholesale closures within any number of casual dining chains.  But losing a House of Fraser is a whole different ballgame.  Why?  Because whereas many, although by no means all, retail units hosting these other struggling brands have been physically suitable for and re-occupied by other emerging brands, many House of Fraser units will effectively become unusable in their current form – too large and cumbersome for anything but a department store.  With no action, they could lie empty for years as an ever present symbol of the town centre’s demise.

As an anchor brand, it is also likely to be the thin end of the wedge for these town centres.  Other retailers are already battling with high rents (although we should remember that landlords are often our own pension funds), business rates, parking issues and the obvious shift towards online purchasing, as well as grappling with what consumers now desire from a physical shopping experience.  Losing the town’s focal department store frankly makes other retailers’ store location choices a lot more straightforward.

However, the danger for town centres is much more than just an economic one.  The state of a town centre is the indicator that residents frequently default to when assessing how proud they are of their local area.  And we already know the strong relationship between community pride and social indicators like crime, mental health and wellbeing. Medium-sized towns, such as many of those impacted by the impending House of Fraser closures, now need to dramatically re-invent themselves.  Tinkering around the edges by implementing some of the easier actions recommended in the seven year old Portas Review is no longer enough.  Maybe the House of Fraser news will be the catalyst that is needed to spur local authorities into action.  Someone in Grimsby hit the nail on the head: “In order for the town centre to thrive and continue we have got to move it away from somewhere where people come to shop,” he said. “If we can try and create a town centre where people might live and spend their leisure time, we will have more of a cluster of activity going on.”  I wish this gem had been expressed by a local authority representative, but it was left to a commercial property agent to impart this insight – an organisation who can only deal with the infrastructure available.

Ultimately, the issue is that our town centres are now too big.  I despair when I hear throw away remarks about creating a ‘coffee culture’.  Yes, that’s part of the solution, but there are currently 53 empty retail units in Grimsby, which conjures up an interesting image!  There are some great examples of where towns and cities are beginning to see the light and design smaller, more focussed leisure destinations in their centres.  Leopold Square in Sheffield, for example, has used the stunning Grade II listed architecture of the former Sheffield Boys School as the backdrop for the creation of the city’s ‘go to’ social destination, hosting restaurants, bars, a hotel and an events programme.  It’s a relatively small space, but that’s what needed to provide the necessary focal point and buzz.  Crucially, it’s even got its own website and social media channels. Creating these social hubs will not come naturally for many a declining medium-sized town centre.  They will need a nudge, or more likely an almighty shove, from those in government.  The government needs to recognise that this is now a town planning issue – an admittance that the physical geography of the ‘town centre’ simply has to change, most likely made more compact.  For those involved in reinvigorating the High Street, there is some helpful good practice guidance here: http://thegreatbritishhighstreet.co.uk, which shows some government action.  But as is so often the case, this guidance is heavily focussed upon strategy rather than how to stimulate action.

There is a massive opportunity here to reinvigorate our towns for the benefit of their local communities and re-establish that vital civic pride, with all of the social benefits that brings.  But we are now at the point where we need significant government action and not just rely on the commercial sector to solve the problem in a piecemeal fashion.

Our town centres are not ‘all doomed’.  We need some strong leadership and above all, ‘don’t panic’.

If you’re in the visitor attraction business, you couldn’t summarise... END_OF_DOCUMENT_TOKEN_TO_BE_REPLACED

So Mark Zuckerberg made it sound so simple. “The thing that we are trying to do at Facebook, is just help people connect and communicate more efficiently.” Social networks were supposed to help the world connect, be a platform to share views that provide food for thought and ultimately bring us all closer together. END_OF_DOCUMENT_TOKEN_TO_BE_REPLACED